With regards to humankind, I stay cheerful. In any case, with regards to governmental issues, I have figured out how to be a doubter. However, what I saw today during Prime Minister Abiy Ahmed's assembly at the Convention Center was an amazing update that adoration is more noteworthy than retaliation.

For a really long time, my country Ethiopia has been destroyed by clashes and hatred. A country that endure flawless for a very long time was bursting at the creases and confronting an existential emergency. In this harmful climate of outrage, barely any needed to offer a bit of leeway and everyone needed to be the victor. Simultaneously, all were losing as they hung harshly to their inner selves.

That is the reason what happened today was such a turning point. Dr. Abiy noticed that pushing ahead as a group expects us to be excusing to each other. Rather than utilizing affronts as sledges to decrease each other, he requested that we utilize the mallet (medosha) to thump down the dividers of outrage that kept us partitioned.

He at that point followed up his words with activity. Dr. Abiy, in his second to delight in the gleaming gathering from individuals, stopped and welcomed Tamagn Beyene to the stage. Tamagn had been a candid pundit of the Ethiopian government for as far back as 27 years; his furious resistance to the TPLF junta made him a provocative figure in the domain of Ethiopian legislative issues. The two men embraced and showed individual Ethiopians that adoration and solidarity is the solitary way we construct scaffolds to tomorrow. This was a shocking scene to observe. In a social and political air where detachable complaints are the standard, by looking for abstinence and saying yikirta (sorry) rather than looking for revenge, Dr. Abiy and Tamagn decided to walk an alternate way. 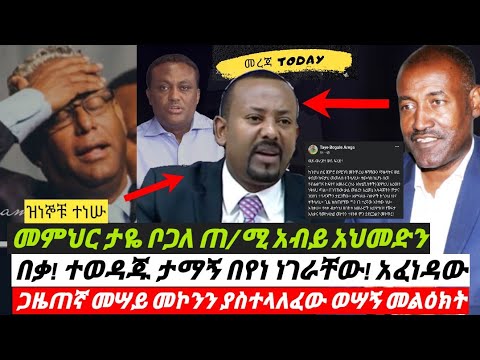 With regards to humankind, I stay cheerful. In any case, with regards to governmental issues, I have figured out how to be a doubter. However, what I ...