The legendary Ethiopian artist Alemayehu Eshete's funeral service is held today. Rest In Peace. Born in 1941 the singer rose to fame in the 60s, matching his Ethiopian heritage against jazz improvisation and soulful appeal. Performing with the famed Police Orchestra in Addis Ababa, Alemayehu Eshete enjoyed his first hit 'Seul' in 1961 before forming his own Alem-Girma Band.

Releasing 30 singles across a 15 year period, Alemayehu Eshete became one of the defining Ethiopian artists of his era - at one point dubbed the Ethiopian Elvis. Political shifts in the country substantively altered the cultural climate, but a new generation of crate-diggers - spurred on by the Ethiopiques compilation series - embraced his music.

Writing, recording, and touring until the very end, multiple reports from Ethiopia have confirmed the passing of Alemayehu Eshete. Eshete gained fame in Europe and the Americas with the release of Buda Musique's Ethiopiques series of compilations on compact discs.

Ethiopiques Volume 9 is devoted entirely to recordings of his earlier music, and Volume 22 covers his career between 1972 and 1974. Other songs have also appeared on Volumes 3, 8, 10, and 13 or the series. In 2008, Eshete toured the United States with fellow Ethiopian singer Mahmoud Ahmed, backed by Boston's 10-piece Either/Orchestra. 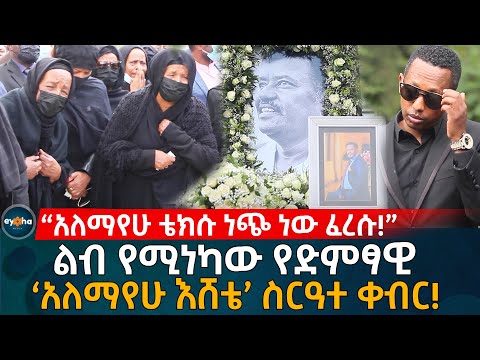 The legendary Ethiopian artist Alemayehu Eshete's funeral service is held today. Rest In Peace. Born in 1941 the singer rose to fame in the 60s, match...